I first heard about Henry when Tim Hunkin sent me a link to an instrument called the Catastrophony. Being a fan of unusual musical instruments, I was surprised I hadn't already seen it.

It took bit of searching to unearth further material, and I was surprised how relatively under the radar Henry's projects were, considering the high quality of his work. That's high quality including the concept, build and musicianship.

I forwarded the Catastrophony link to Sam Battle, who was amazed as he'd coincidentally just been advised by someone else one day before that he ought to get in touch with Henry.

Henry very kindly agreed that we could all visit his place in Faversham (UK), and eventually we found a date that suited everyone.

On Monday 24th October 2022 I picked up Tim from Southwold, and we headed down to Sam's museum in Ramsgate. (If you've not been yet, you should definitely check it out - This Museum is (Not) Obsolete is a treasure trove of interesting machines, vintage test equipment, homemade synthesisers, musical sculptures, retro computers, modified kids toys, telephone exchanges and all sorts of fascinating objects. It has a very high density of interesting things per cubic metre, and it's very easy to spend a lot of hours there). 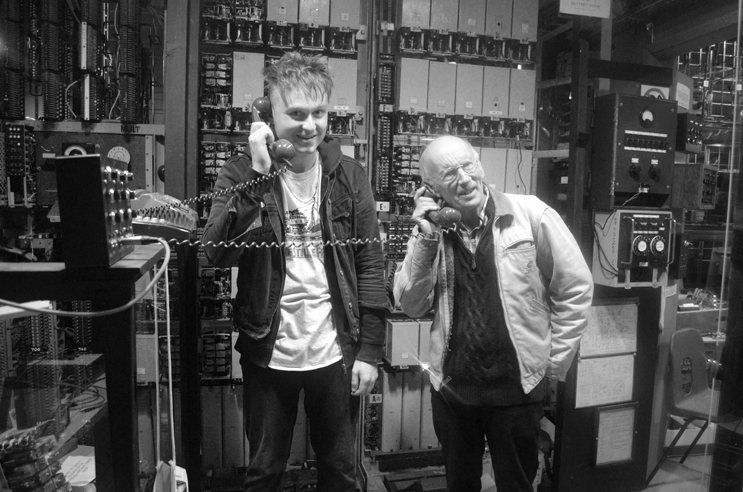 It was also great to catch up with super cool artist Melanie King.

The next morning we headed over to Biscuit House, the former paintbrush factory where Henry lives and works. After examining the musical fence, we turned the handle on the mincer that opens the gate, and headed under the piano keys that decorate the porch.

We were greeted warmly and led to the old canteen for coffee, while Henry told us of his progress renovating and insulating the living quarters in the factory. For those who wanted white coffee, milk was poured from a ceramic Dalek.

What followed then was the most incredible tour, which I don't have a hope of describing fully here. I have never seen such a collection of industrial machinery. A ridiculous number of lathes, milling machines, radial arm drills and other monstrous three phase equipment. Lathes for precision, for size, for brute force, for Sunday best. 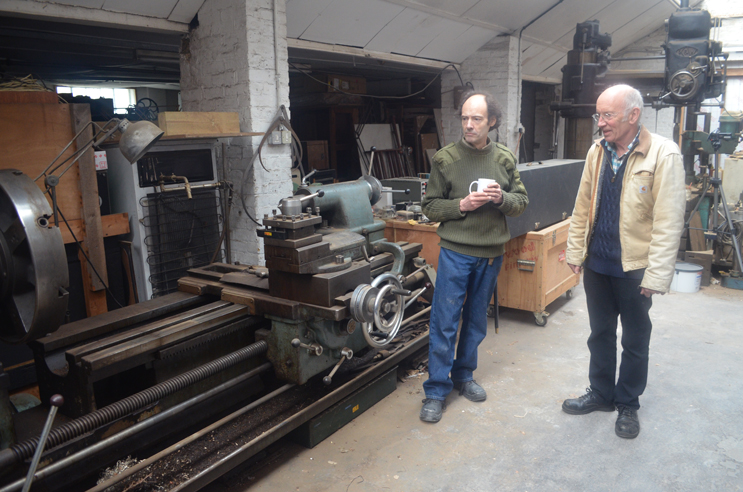 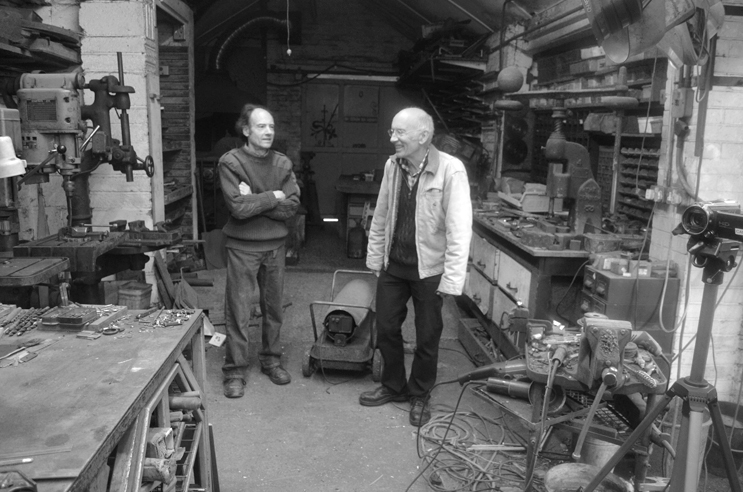 Then the instruments - the Voicycle, the Sharpsichord, the Hooty Scooty, all demonstrated with supreme skill. The Hooty Scooty is possibly my very favourite instrument of all time - it honestly makes me glad that the universe exists.

A new instrument, the Stage Cage: a large wheeled setup with valve signal generators and other equipment, including two reel to reel tape players with a tape passing between them across a pair of sliding tape heads on rails. 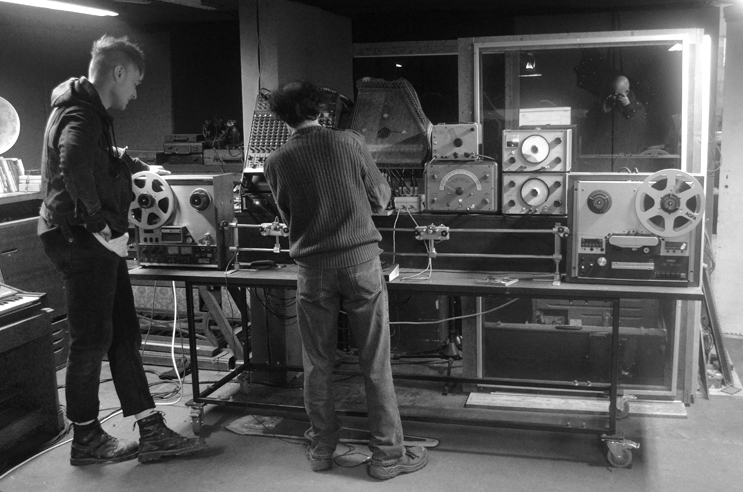 Wow, there's an Optigan, the organ that plays sounds optically from patterned discs. Oh wait, there are three Optigans. And a vintage Mellotron, which Henry kindly dismantles so that we can all examine it properly. Henry has also made parts for the Mellotron company in the past, including flywheels, tape bins and a dust extraction system of his own design. 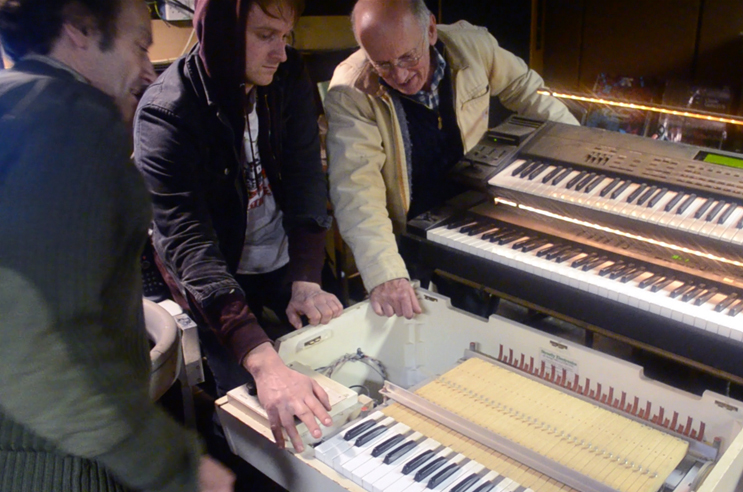 Rather than just an impressive collection of equipment, however, it was much more than that: it was a collection of the tools used by a very inquisitive mind. Everything was there for a purpose - from a past or future project, for hammering steel from the forge or for making a really good "boing" sound.

Then at last a box is opened, and there's the Catastrophony!

This written description is far from adequate, but this video may give you a glimpse into the magical world within Biscuit House...

We finally said goodbye 12.5 hours after knocking on the door that morning, fairly exhausted by an amazing day out.

It was great to see Henry, Tim and Sam together in one place - all people who are driven to complete projects for the joy of making things, all people who I find very inspiring.

It was pointed out during the day that everyone present wore shoes with paint on, which was funny.

What a great trip! 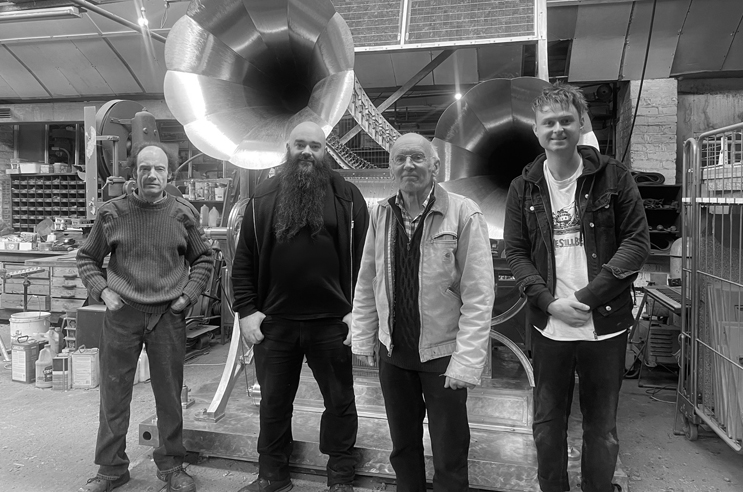