There wasn't a great deal of time to put this together, but it can be inspiring to have a tight deadline. This means that more projects can be completed, making life a rich tapestry of running about making cool stuff with no sleep. The best thing was the chance to go to Portugal with a bunch of really good friends - it was hard work, but massive amounts of fun.

To describe the ping pong cannon concept, Chris of Is This Good? sent a video of a prototype he built, and a computer generated model of roughly what the final thing should look like.

To join the 2m "feeder tubes" to the main barrel, it seemed like a good idea to make a steel manifold. A two part plywood jig was put together - see below. The first part (not shown) allowed a transfer punch to make an indentation for a pilot hole. The first part then lifted out, revealing a set of holes designed to guide a hole saw to cut the holes for three vertical tubes. There were also rectangular cutouts to allow brackets to be welded on at 90&deg. 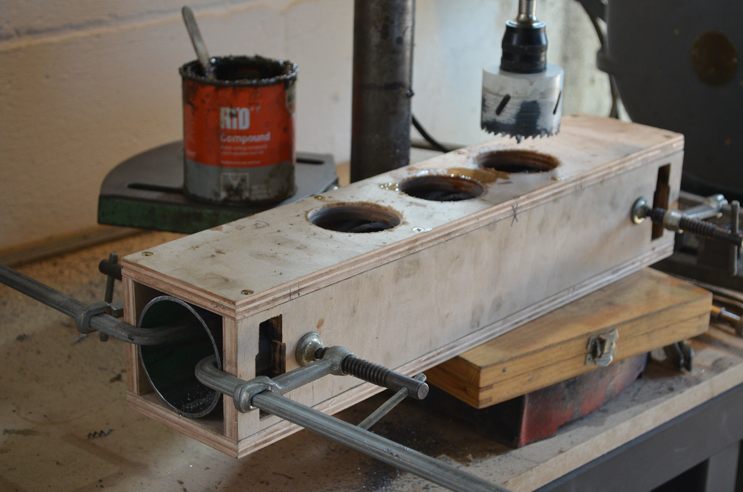 The jig made to align the three vertical tubes was deliberately made 4mm too wide over all, to cancel out the heat deformation after welding. Once the tubes were welded and the jig removed, it was satisfying to watch the steel slowly correct itself into a parallel formation as it cooled. 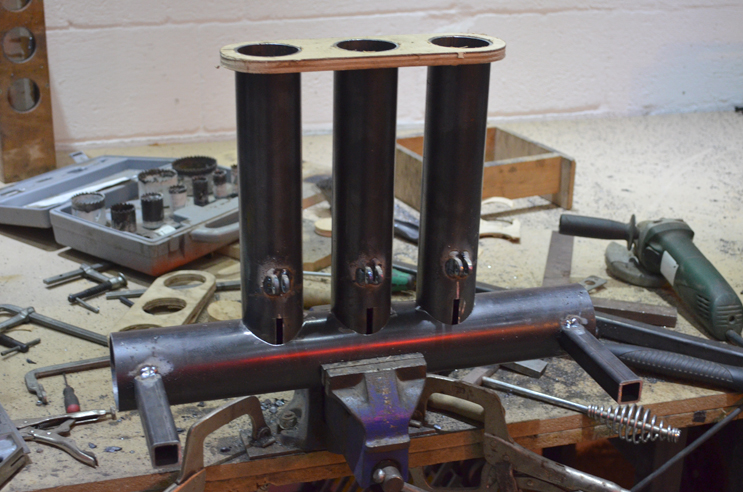 Another plywood jig, to align the brackets that held the actuators. 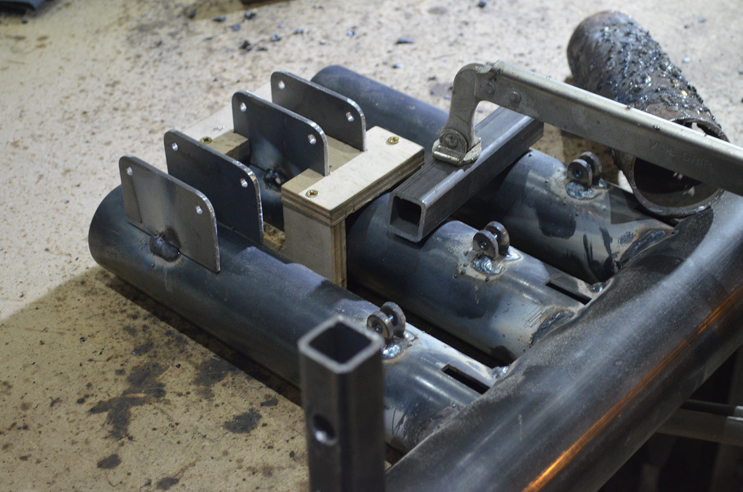 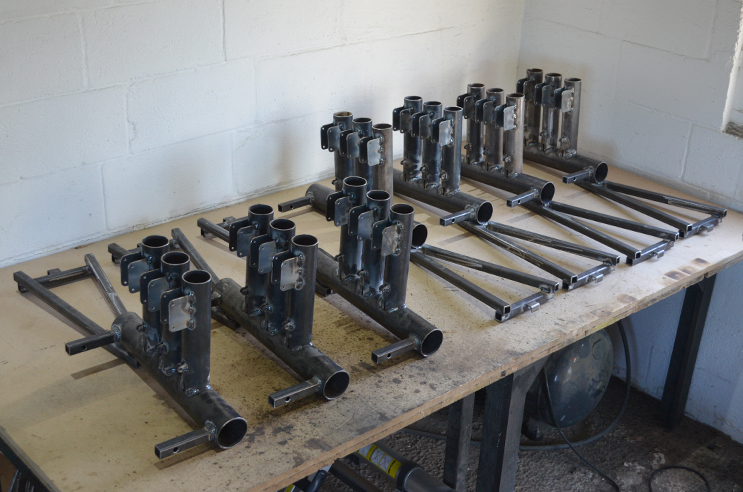 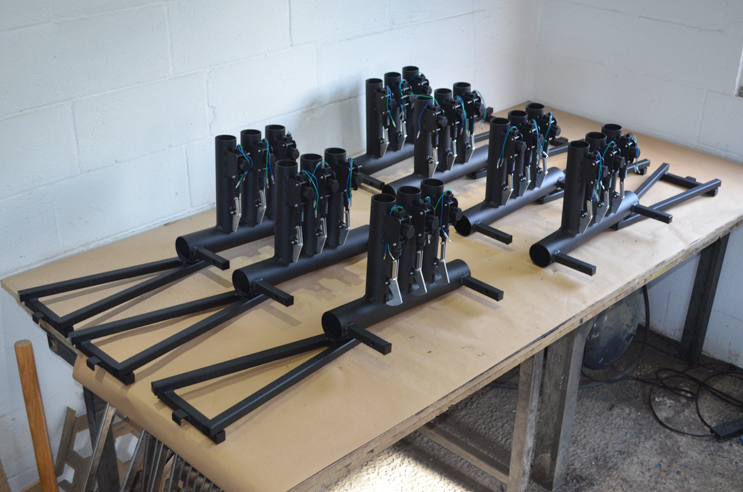 Acrylic barrels. The holes and fins were necessary to prevent weird vortices that built up due to the reduction of the diameter from the manifold to the barrel. The original prototype didn't have this problem as all the tubing had the same diameter, but the problem appeared late one night during a test on a whim, and this was the best solution after a few hurried prototypes. In actual fact, the barrels still jam now and again, and they will be upgraded for any future outings. They need to be a minimalist acrylic "cage" of rings and long horizontal pieces. There wasn't time to make this for version one. 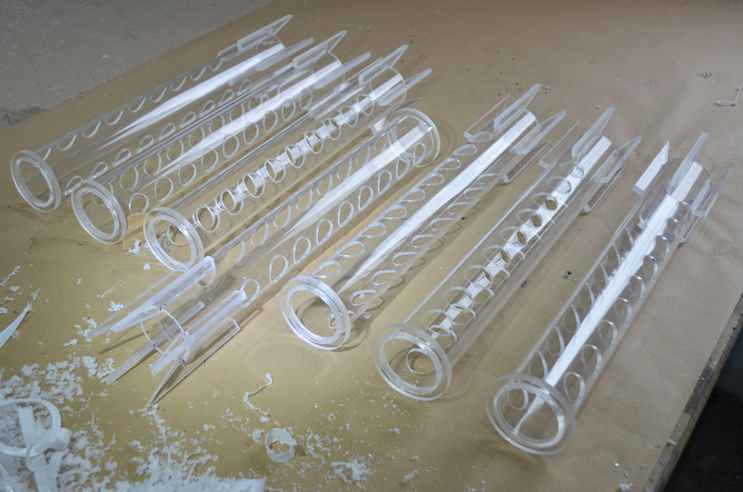 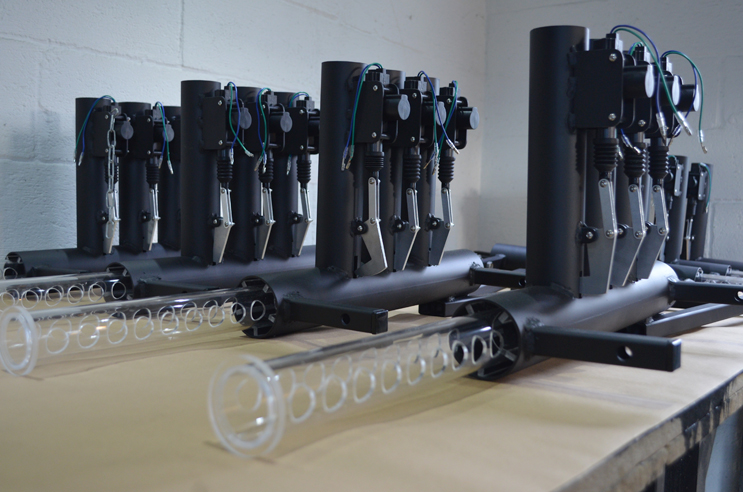 Closeup of the actuators and pivoting cam release systems 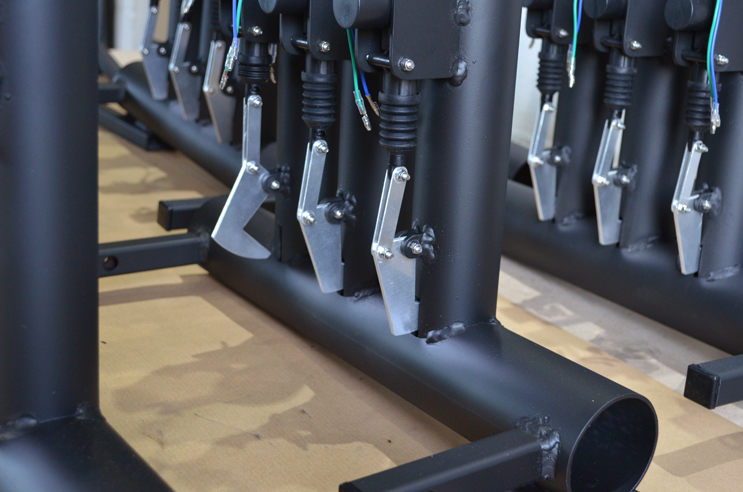 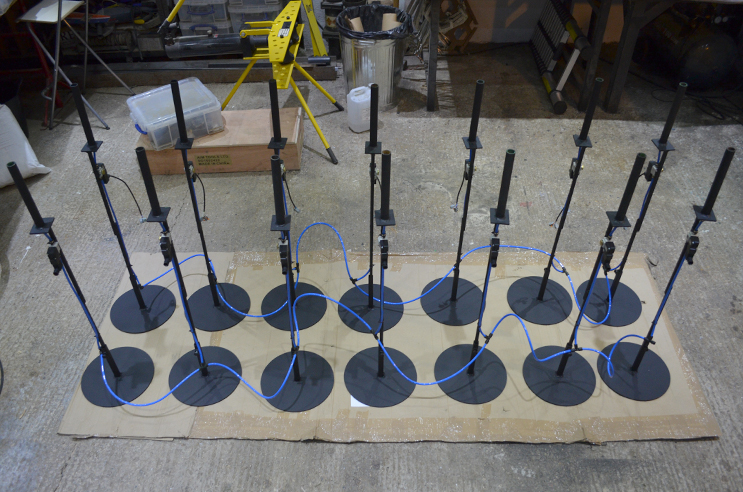 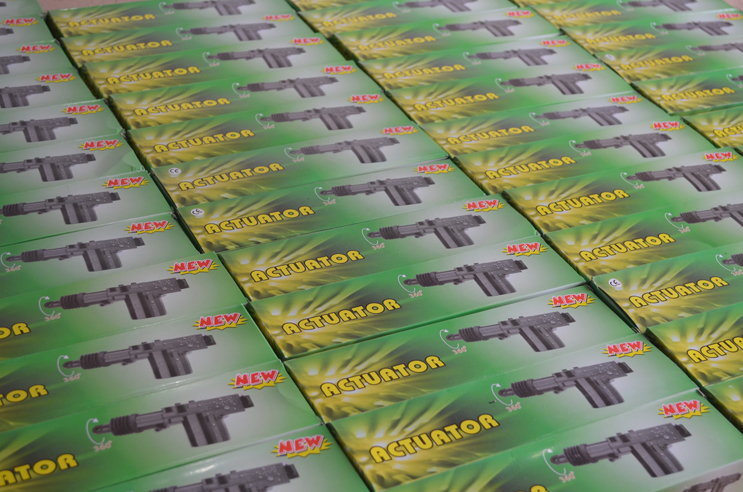 Testing in the Nervous Squirrel field with Karbula's gravity-defying skills 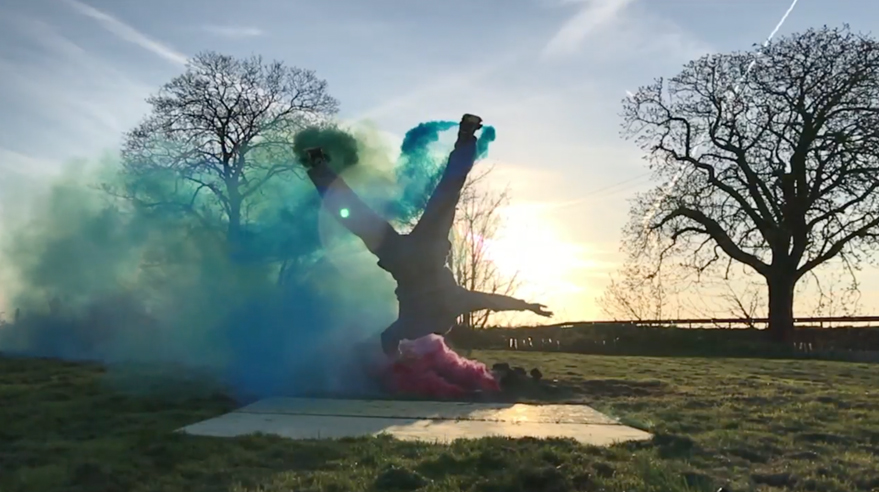 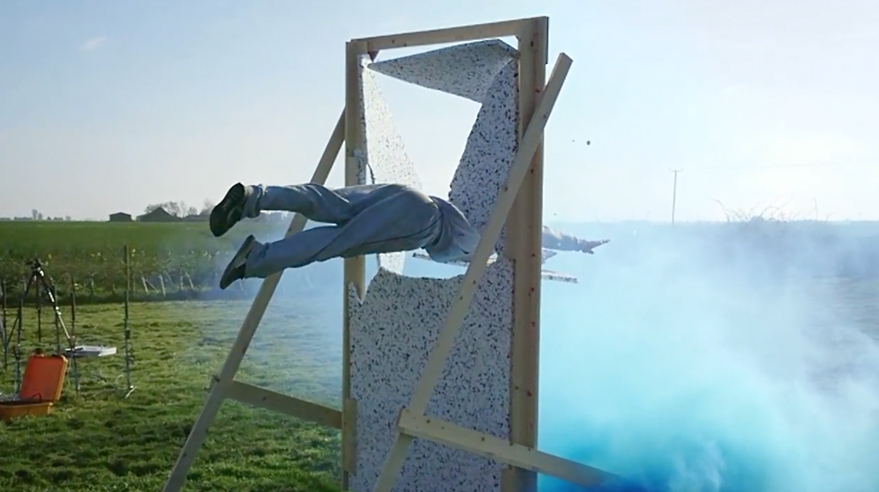 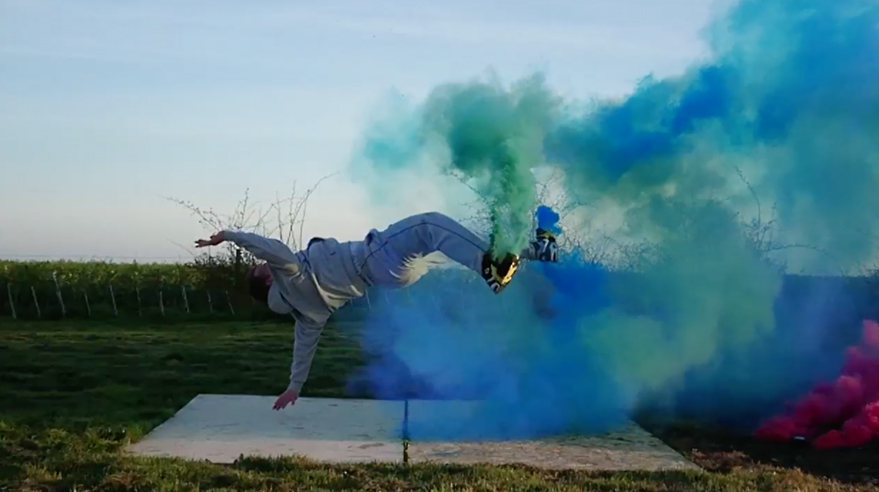 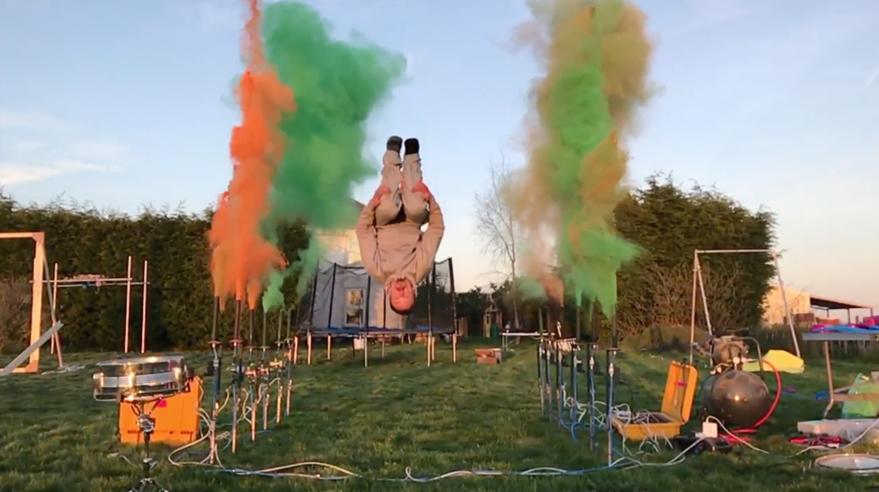 An early concept, later abandoned, involved a drum kit with rubber membranes and explosives to launch clouds of coloured powder. The tests worked well - hopefully this will end up being used on another project, get in touch if interested... 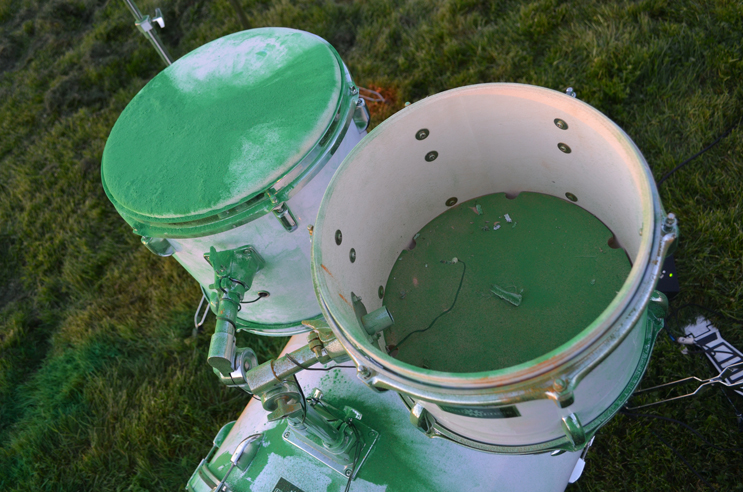 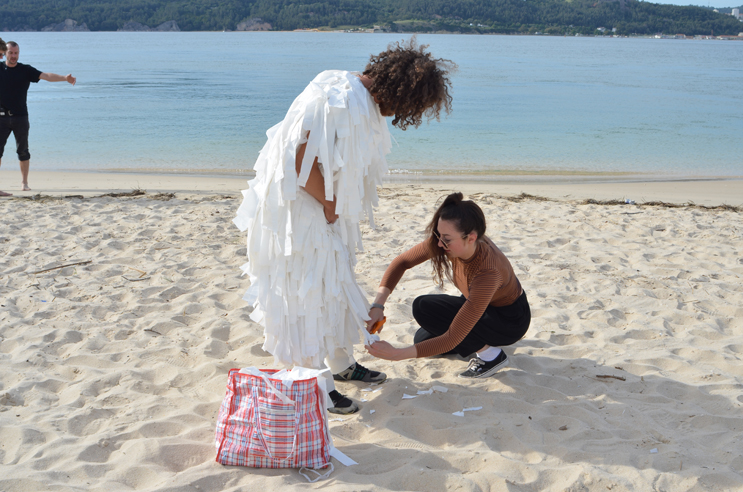 This photo doesn't need a caption. 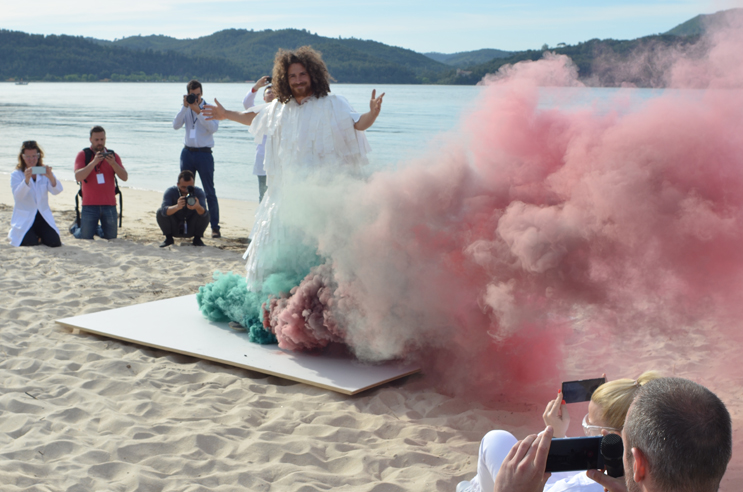