During a visit to Berlin for the Worldtronics 2013 festival, I popped in to the Museum of Musical Instruments for a look around. They have an awesome collection of acoustic instruments, musical machines, musical walking sticks, microtonal pianos, Hammond organs, a "serpent", a VCS3 with sequencer and a violin in the shape of an amoeba. I'd previously read about the Trautonium, and was aware of it being "something like an Ondes Martenot", but the one at the museum invited a much closer investigation.

The Trautonium is played by placing/sliding a finger along a resistive wire, which makes contact with a rail underneath. This controls the pitch, but the entire assembly holding the wire can also pivot when pressure is applied, which allows the volume of a note be controlled. There are two monophonic manuals, the sound of which can be set up independently. As well as playing a continuous pitch along the wire, there are a number of adjustable tabs that make it easier to land on an exact note, which I suppose also help as a visual aid to find note positions. There are two foot pedals, and a separate switch box to set up the connections of the interfaces to a fairly basic modular synth setup.

The original instrument was created by Friedrich Trautwein around 1929, but was then developed extensively by Oskar Sala, who spent many many decades using it to make fantastic sounds and compositions.

Sala's "subharmonic generator" system seems to be the most original contribution to the actual sound generating abilities of the instrument. Doepfer make a synthesiser module that emulates this, in fact they have a great page explaining the Trautonium in detail.

I first heard of Oskar Sala a few years ago after picking up an LP called "Five Improvisations on Magnetic Tape" (1961), which in all honesty didn't grab my attention that much. It was actually one side of an LP shared with Remi Gassman, and seemed to consist mostly of rapid trebly squawky melodies and clangs fed through a tape echo. The sleeve notes describe the Trautonium as "...an electronic instrument of kaleidoscopic and practically limitless tonal possibilities". There is also a note claiming that the record can "...blow out speakers, traumatize cats and arouse the landlord." I've since heard other recordings by Sala that I have enjoyed more.

There are some delightful YouTube videos of Oskar Sala demonstrating the instrument with very obvious passion and glee - check 'em out.

The Musikinstrumenten-Museum has a lot of valuable instruments that aren't stored in glass cases, and it is wonderful to be able to examine them up close. The instruments are protected by a number of rather sinister guards who literally follow you around the museum, peering over balconies and around pillars. When I visited there were in fact more guards than visitors. A few days after the first visit I returned for another look at the Trautonium, and took a load of photos, under the close supervision of a stern woman who was annoyed that I had moved the little information card. If you're interested, you can download all 120 photos here (976MB), including shots of each individual module. 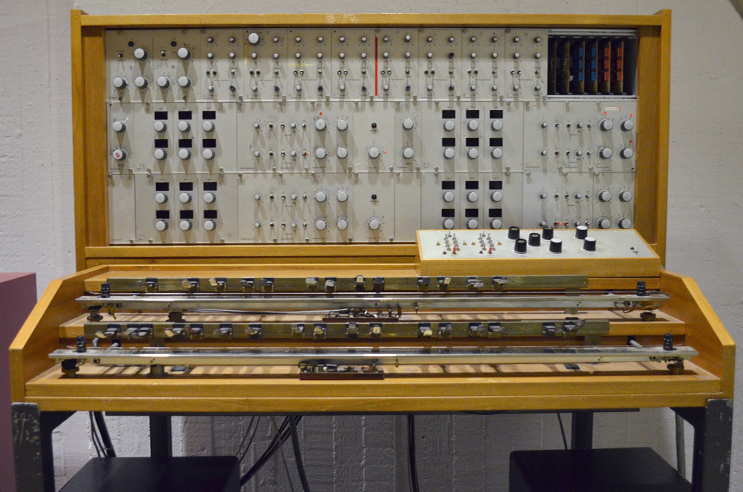 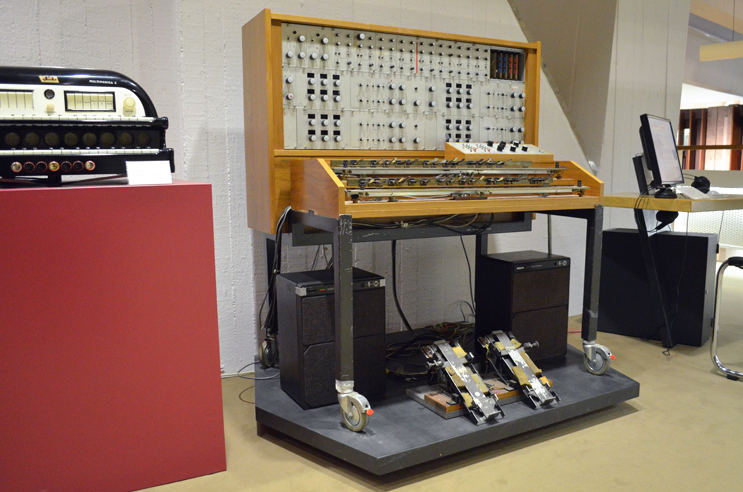 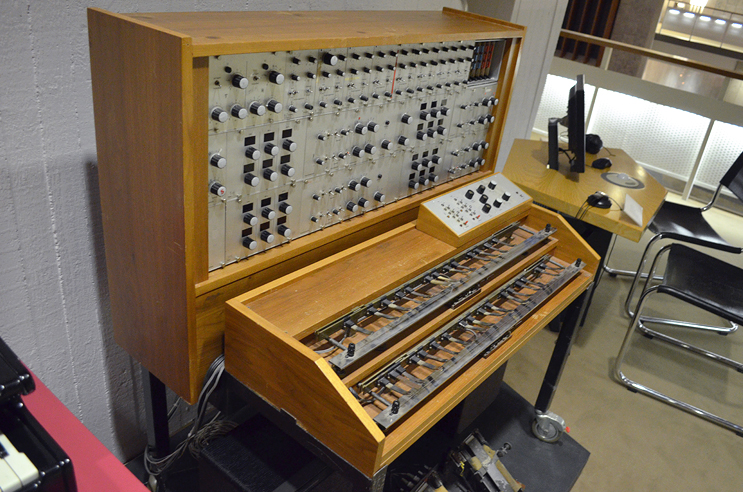 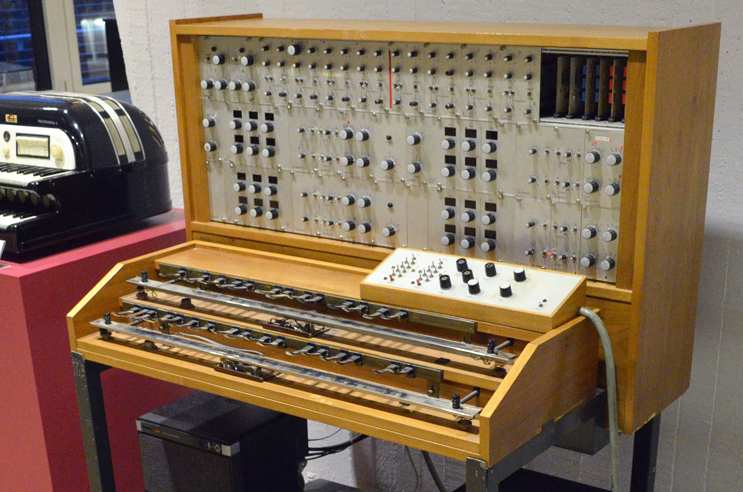 Here you can see the two wires for determining pitch. The metal rail under each wire pivots on a couple of bars that pass back through into the casing. The metal rails control volume depending on how hard you press down, and are sprung to return once the player's finger is lifted. 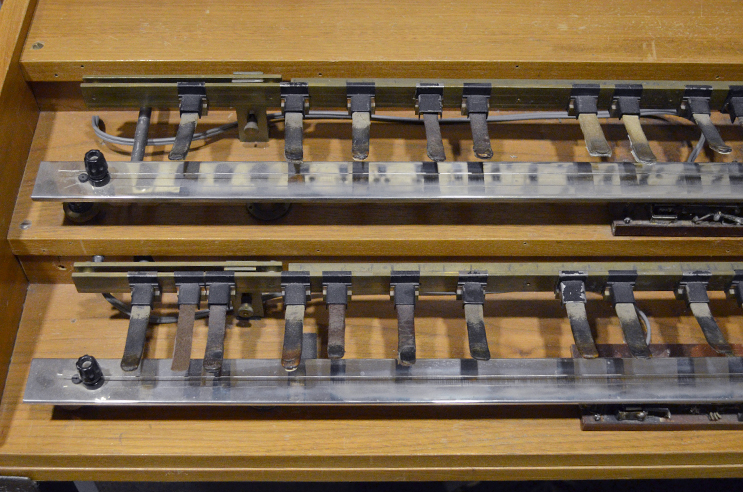 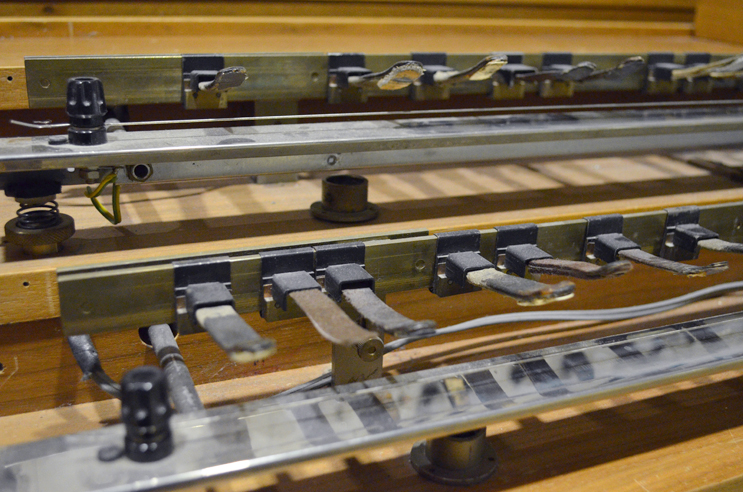 This box is for setting up the signal paths from the pedals and manuals to the sound generating circuitry. If you look closely there is an area on the lower left of the control panel covered in tiny dents, which I think must be from a tuning fork. I love how worn the instrument is, showing how many hours of use it has had, and I really like all the little pencil notes marked around the controls. 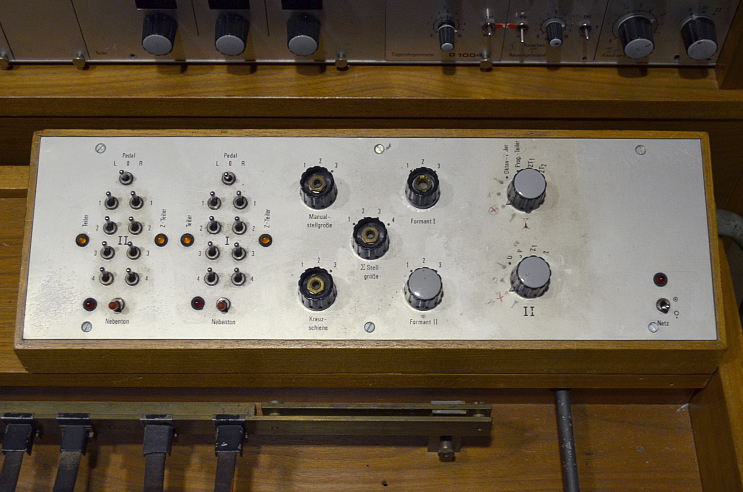 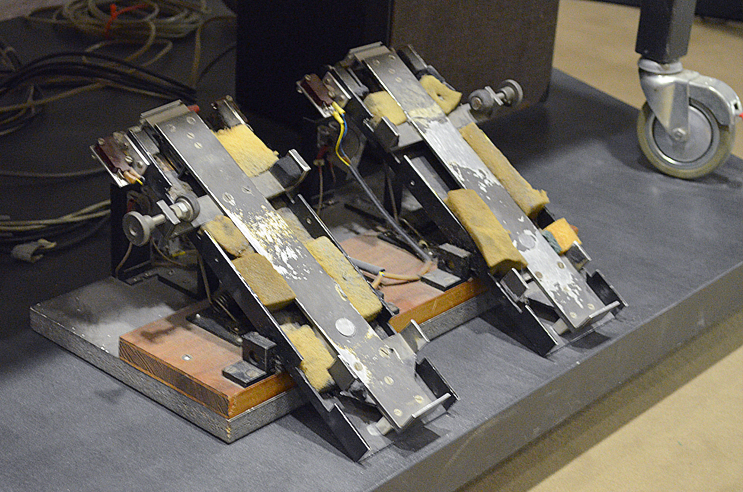 These switches (the red and blue blocks) are for connecting the filters in preset configurations, which I don't really understand. 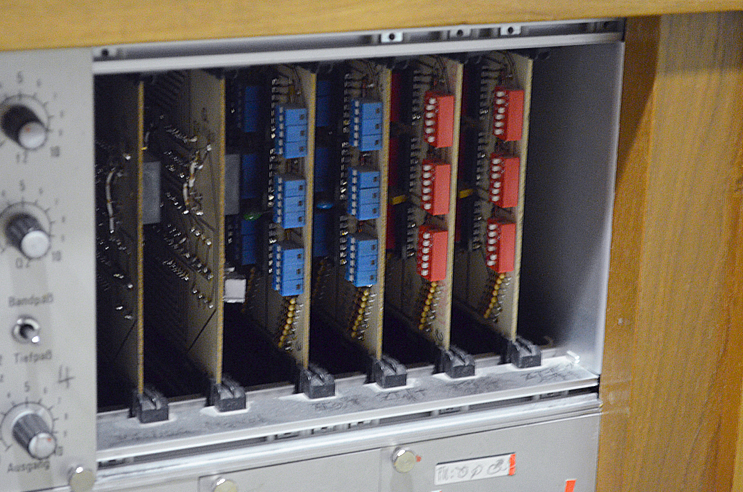 The central module with the screens is one of the "subharmonic generators" that give the Mixtur-Trautonium the "mixture" bit of its name. The modules appear to be held in place with quick-release thumb screws, which is an interesting idea.

It might be possible to make an Arduino-based version of the subharmonic generator: square wave input, transistor buffer, frequency counter library, rotary encoders to set the frequency divisors, some Adafruit 7-segment displays, and then corresponding outputs. 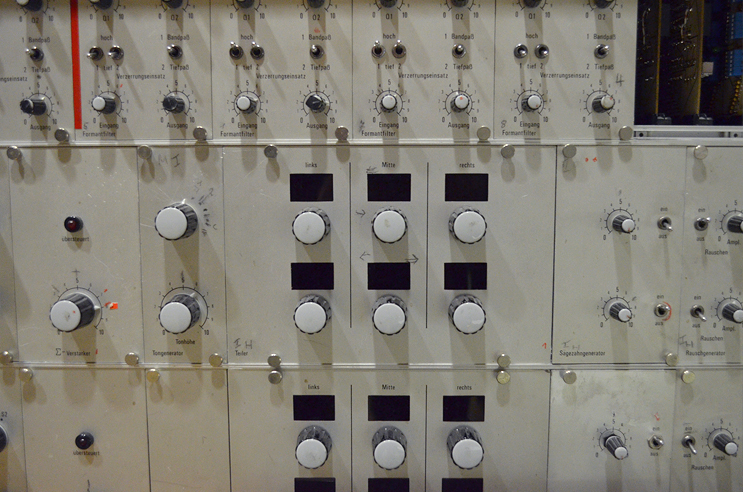 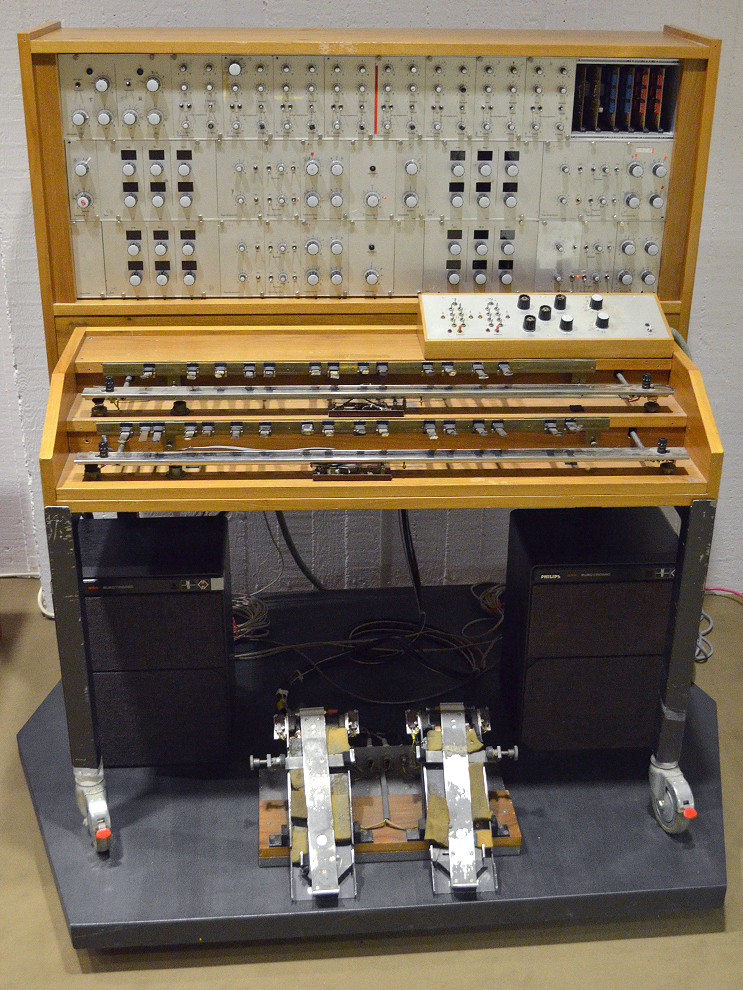 It would be great to make an electronic Captain Beefheart cover album called Trautonium Mask Replica...